Dave Ebbert founded DNE Motorsports Development in 2001, bringing with him decades of experience building performance and racing engines for both land and water. Over the last 20 years, Dave has developed a reputation for speed and durability and commitment to customer support over the lifetime of his engines. With a broad client base from drag boat racers to land speed racers and everything in between, Dave and his team are dedicated to understanding their customer’s criteria and building an engine to achieve their goals.

Dave’s passion for speed started young. At age 17, Dave teamed up with Jack McClure at Marine Performance Designs, where he rebuilt and blueprinted jet drives and jet boat hardware and began building performance engines for high-performance jet boats and drag boats. Dave went on to hold positions at Kuhl Superchargers and Steve Jennings Racing, where he built engines for IMSA World Sports Car, Toyota Atlantic, and Formula Atlantic. Dave then served as the engineering manager for Toyota Motorsport Development as they ventured into the CART Racing Series.

Prior to founding DNE, Dave joined up with the infamous Dan Gurney and his All-American Racers group during their involvement with the CART Series. There, Dave broadened his knowledge of the open wheel Indy car and was involved in building and dyno-testing engines for Alex Gurney’s Atlantic Series car.

Today, as the founder and very hands-on owner of DNE, Dave takes great pride his team’s attention to detail, customer support, and winning record. On the water, his drag boat engines have racked up championships and set records in IHBA, NJBA, and the Lucas Oil Drag Boat Racing series. On land, he’s just as decorated, with championships in NJBA, Bonneville Racing, and NHRA. Dave’s engines still hold Bonneville records in the AA/Fuel Coupe, AA Gas Alt, and AAG/Modified Roadster. He is most proud of his own standing 6.53-second NHRA Competition Eliminator A/Dragster record. 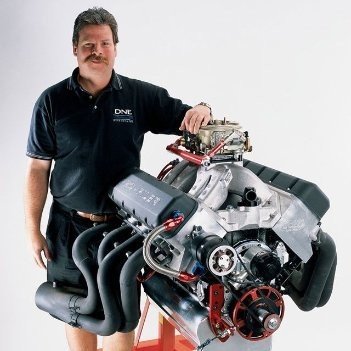